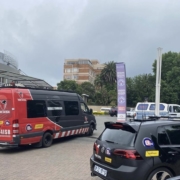 Members from Vision Tactical lending a helping hand at the Nelson Mandela Foundation...
Scroll to top