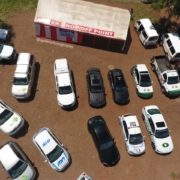 Following the call by the MEC for Community Safety, Faith Mazibuko, and the SAPS’s Major-General Patricia Rampota to put a ‘Tight Grip’ on crime, the South African Police Service (SAPS) Laudium station together with Private Security and Laudium Disaster Management launched a JOC in the Laudium area which will strengthen efforts in the fight against crime in the suburb.

SAPS Laudium Station Commander Inkwane said that the JOC will enable all stakeholders to build a strong partnership in the fight against crime.

“The JOC will be active 24 hours a day, various activities and operations will be conducted  to create a safer environment for all.”

Inkwane added that the launch of the JOC aims to provide an improved response to coordinated planning which will deal effectively with any eventuality.

Director of Vision Tactical Yaseen Theba welcomed the launch and praised the South African Police Services and other stakeholders for coming on board.

“The goal here is to maintain and establish a platform for information sharing through a collaborative approach amongst stakeholders through evidence led information.”

Laudium Councillor Essop told Vision Tactical that it’s encouraging to see the launch of the JOC.

“I would like to take my hat off to the Station Commander of Laudium for reaching out and allowing this to happen, this is only for the benefit of the community and we hope that it yields positive results.”

Units active at the JOC in Laudium which has been set up and launched for the Festive Season, the location will be the central point where law enforcement and security companies together with @DMLaudium will coordinate #CrimePrevention operations…

Theba says that the launch of the JOC came at an opportune time to arrest the alarming levels of crime through collaboration with key stakeholders.

We hope that the existence of the JOC will grant all key stakeholders an opportunity to come together with a common purpose in maximizing and improving the ability to safeguard communities and prevent criminal activity in cities, Theba added.