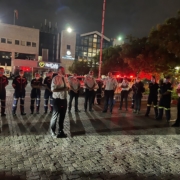 Colleagues and family of the four health-care workers and a pilot who were killed when a helicopter they were travelling in crashed in KwaZulu-Natal last week paid tribute in an emotional parade on Wednesday night.

Netcare, for whom most of the victims worked, described it as a painful day punctuated with deep shock and disbelief.

Vision Tactical Specialised and Intervention Units on Empire Road in Johannesburg to pay tribute as the
remains of the fallen heroes from the Netcare 911 helicopter crash will be honoured 🎖 #Netcare911 pic.twitter.com/CzRZdjJzN8

The hospital group said it was a long, emotional day for the families, loved ones and colleagues of Dr Kgopotso Rudolf Mononyane, Dr Curnick Siyabonga (Siya) Mahlangu and Mpho Xaba, all from Netcare Milpark Hospital, and Sinjin Joshua Farrance of Netcare 911 and Mark Stoxreiter, the pilot from National Airways Corporation (NAC).

In paying tribute to his colleagues, Netcare group CEO Dr Richard Friedland said: “We are here today to bear testimony to the lives of these great human beings, to continue their unfinished legacy of healing and bringing hope.

There is no greater act of humanity than to lose one’s life in attempting to rescue the life of another.

“Our hearts are broken, we mourn the loss of these fallen heroes, these front-line workers who have given so selflessly, so courageously of themselves. Our hearts are shattered for you, their families, children, loved ones, friends and colleagues whom they have left behind.

Live scenes from the parade in honour of the fallen heroes from the horrific helicopter crash – “we are brothers and sisters, comrades with one common goal and pursuit to be there for people during their most vulnerable of times.” #Netcare911Heroes🎖 pic.twitter.com/F66g7xXxRM