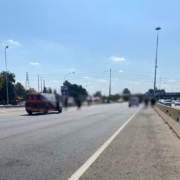 After an attempted robbery on the M1 North highway in Johannesburg on 21 April 2021, a shootout ensued between the police and 10 suspects. Two suspects were critically wounded, four others arrested and another four managed to escape.

A high-speed chase and shoot-out between law enforcement and a gang of alleged armed robbers resulted in a portion of the M1 highway near the Woodmead exit being closed off on Wednesday. https://t.co/3OwOwnKw3D