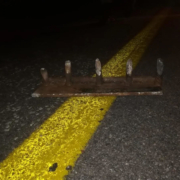 The Police have issued a warning to motorists about criminals placing spikes or objects on public roads with the intention of forcing them to stop the car and robbing them.

Over recent weeks, there have been numerous incidents of motorists complaining about spikes or other objects were placed on public roads. On the R104, near Cullinan, on Saturday, spikes were placed on the road near the Sammy Marks Museum. It was also reported that grass was set alight next to the road to confuse motorists with smoke. Another incident was also reported on the Old Bronkhorstspruit Road and the N4 in Pretoria on May 17.

The bandits who maim and rob unsuspecting motorists on Gauteng freeways have intensified their reign of terror, and are said to operate in two groups: an advance team that lays spikes on the road and the other that commits crime after the incident.

Amid rising cases, provincial traffic officials have warned motorists that the criminal gangs have become more daring and now even drop sharp objects from overhead bridges at night over the weekends.

This comes as frightened motorists began creating and circulating voice clips to warn each other of the continued criminal trend.

On one clip circulating in Tshwane, a man is heard informing motorists that these criminals travel in two groups.

He said one group would throw the spikes down when a car was about 300m away, and the other would wait 100m down the road to carry out the robbery.

Warning motorists to be vigilant, Gauteng Traffic Police spokesperson Sello Maremane confirmed that the police had, in recent times, noted a rise in incidents of the spikes placed strategically on freeways.

He said these people would also stand on bridges and throw rocks on windscreens or simply hang rocks from above and have a car smash against it.

The following safety tips are to be followed as a precaution when a vehicle has been spiked.