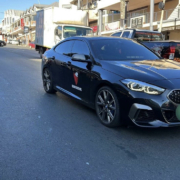 Police are searching for a gang of about eight armed men, driving in a white Toyota Quantum Mini Bus, who allegedly robbed a pharmacy in Melville on Monday 13 June 2022, at approximately 08h30, where they took cellphones and an undisclosed amount of cash.

It is reported that the armed suspects entered the pharmacy, pretending to be customers.

They then robbed the employees at gunpoints, taking their cell phones and cash.

The private security officer responded to a business robbery in progress. As he was approaching, the suspects started shooting at him and a shootout ensued. A passenger of a truck that was passing by was hit by a stray bullet and rushed to the nearest hospital for medical treatment.

Police are appealing to anyone who might have information that can help in the investigation or assist apprehend the suspects to please call the nearest police station or crime stop on 08600 10111.

THREE SUSPECTED BLUE LIGHT ROBBERS FATALLY WOUNDED DURING A SHOOTOUT WITH THE...